This past Friday I went out on the Nith River. This is a smaller secluded river that meets up with the Grand River in Paris, Ontario. Paddling this river is only possible at certain times of the year, most notable the spring as the water level needs to be high enough to make passage possible. Most of the river is a relaxing 4 ft/mile elevation drop but near Paris it increases to 20 ft/mile drops with a few rapid sections.

There isn’t really a great public launch site for this river that I know of. There is a good entry point (coords: 43.223920, -80.476170) but it is marked as private. I entered here anyway since I had already made my plans and travel arrangements but I wouldn’t go again knowing it’s private. 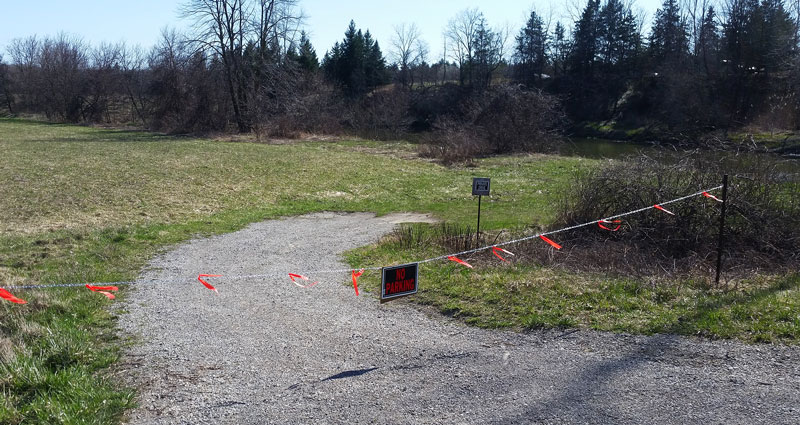 Water level is important for this route.  Too low and there are some sections that wont be easily passable.  I went when the water level at Canning was ~14m³/s; I wouldn’t want to attempt the river too much less than that.  Some sections I did hit bottom but not to the extent of being stuck.

Check the water level of the Nith River here: https://apps.grandriver.ca/waterdata/kiwischarts/rf_nithriver.aspx?_mid_=1054

This is my tracking using Endomondo.  The full trip was 23.5km and it took me 4 hours.  This was a leisurely pace in terms of paddling, but the speed of the water was quite fast so you don’t need to paddle too hard.

As it was early in the year, there wasn’t a lot of wildlife to see along the river, however, it was a very peaceful trip. There is not much industry or development along the river — it is mostly farm land.

Near Paris, there are a few good rapid sections. They are fun but very manageable at the 14m³/s water level. I highly recommend a spray skirt for these sections as the water did fully go over my boat and would have totally soaked the inside of my boat with freezing cold water. . You can avoid most of the main rapids by going around the edges – but where is the fun in that?

I totally misjudged my exit location.  I had planned to exit at the Grand River portage point.  However, this was upstream of the Nith River exit and was not possible to get to with the amount of water flowing in the Grand River.  I had to bail and just exit where I could at the edge of the Grand River.  This ended up directly across the river at the Two Rivers Stadium.  Not ideal as I had to bring my kayak up a large embankment into the park but it worked.

My plan was to bike back to the start to retrieve my car then come back to get my locked kayak.  This took me another 38 minutes to bike.  That is really the worst part of kayaking a river.  How to get back to the start?

Great day!  Try out the route.

[Not a valid template]