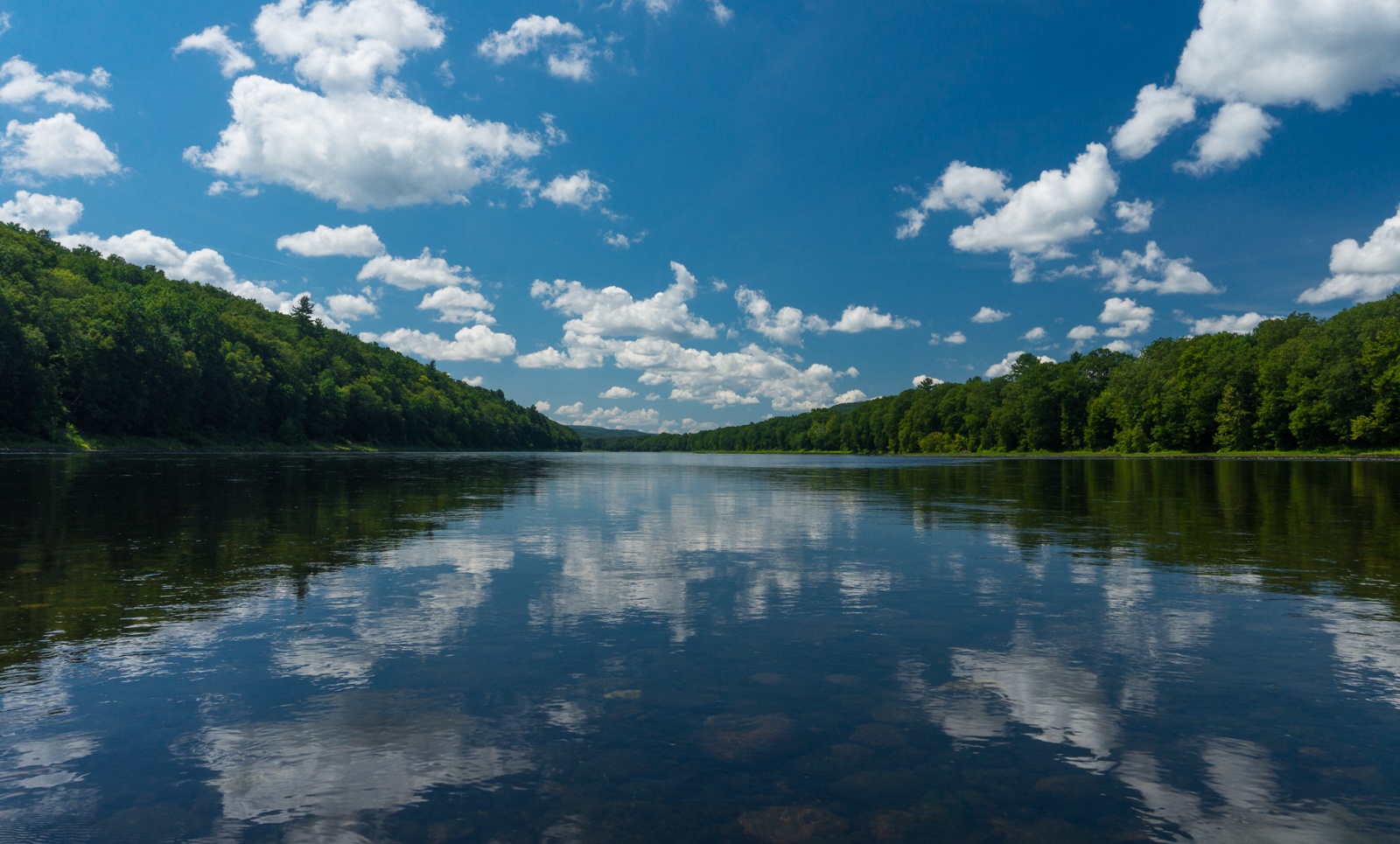 Kayaking the Delaware River is not nearly as hard as I first imagined, nevertheless, it is an extremely fun and amazing trip that I would highly recommend anyone doing.

It turns out that this is practically one of the easiest rivers to run as an individual or group.  During the summer there is a free canoe/kayak shuttle – Pocono Pony – that runs between Milford Beach and Smithfield Beach.  This takes out a lot of the effort into arranging transport up and down the river.  It does only run on weekends and has a fairly limited schedule, so make sure you take the shuttle schedule into consideration when planning your trip.

The river is technically easy so any novice paddler should be able to make the kayak trip in 2 days.  There are some class 1 and 2 rapids but not much beyond that.  These rapids do add a bit of excitement every once-in-awhile, but not to the extent of being dangerous.

The first day I set off paddling down river at about 9am from Milford Beach.  After kayaking for about an hour, I checked my location on my phone only to discover that I was going way faster than expected.  The river was moving fairly fast but it was crystal clear and calm giving a false illusion of the speed I was travelling.  I took the paddling down a few notches and coasted for a while, enjoying the calm and serene river.

I was making so good progress that by noon I was very far ahead of where I expected to be even with minimal paddling.  After a stop to stretch my legs and eat lunch, I checked the map and made the decision to carry on to a further campsite for the night. (I have updated my original map with the actual travel I made in the first day)

The site was a bit closer to the road then I would have preferred but I did like the fact there wasn’t any other campsites nearby.  The next set of campsites were past the small rapids around the bend.

After arriving at camp I quickly setup my Big Agnes Fly Creek UL2 tent and unpacked the rest of my supplies.  I brought a very small amount of firewood to use – basically to start a fire if the surrounding wood was wet.  Turned out, I didn’t need this as there was plenty of dry driftwood nearby.  I actually kayaked across the river to a big dead tree I saw and broke off as much wood as I could.  I had basically no tools so it was a lot harder than I expected.  Gloves would have been pleasant for my hands.

I loaded it up on top of my kayak and carefully maneuvered back across the river. I added it to the existing wood that a most generous previous camper had left.

After relaxing with a book, I started a fire and cooked my food.  I was in no rush and cooked slowly eating for the next few hours.  Remembering to hang my food in the tree so animals, especially bears would not come around, I turned into bed early.

The next morning I awoke to sounds in the forest – a lot of cracking wood and rustling.  Peering out of my tent I saw 3 deer.  They scampered off, but I was already up.

I made my breakfast, packed up my gear, and was on the water by 9am.  Since I planned on arriving at Smithfield Beach in time for the 4:30 shuttle back up to Milford I started out taking my time and surfing in some of the rapids where I could.  The day was again beautiful, the water clear and the sun hot.  Being a Saturday, there was also many more canoeists and kayakers on the river.

Coming up to 11am, I was making good time so I thought about trying to make the earlier shuttle.  1:30pm is 3 hours earlier then I planned, so I really had to start moving if I wanted to catch it.  I changed my mind also because I have about 6+ hours drive back home, plus the shuttle ride back up river is pretty lengthy.

After taking a quick lunch break I checked the GPS and pushed on.  Getting closer to 1pm I was a bit behind where I needed to be to catch the shuttle.  The water in this section was dead.  Almost no movement was to be had so it was pure hard paddling.  I was really pushing it to make it for the shuttle and made it back about 10 mins before it was scheduled to depart.

The shuttle ended up being 15 mins late anyway, but I was happy to be on-board.

One of the highlights was definitely the bald eagles.  I saw a few diving across the river at various points during the trip; what a sight to see.

I was also amazed at the clarity of the river.  Looking down, I could see the rocks, fish, and water vegetation just flying by even when resting.

In general, the river was so calm and peaceful.  You could lose yourself in the day just meandering down the river.  The trip is very relaxing and worth every minute.

This is the equipment list I created for myself of things to bring.  Its probably a good starting point as an example overnight kayak packing list.  Different situations will cause for slightly different gear, but I believe this would be a good base for most people.  Be sure to leave a comment if you think I missed something.

Photos of the Delaware River

Amazing pictures Scott. Seems you had a great time! Your the Man

It was an amazing trip. Thank you for your comment.